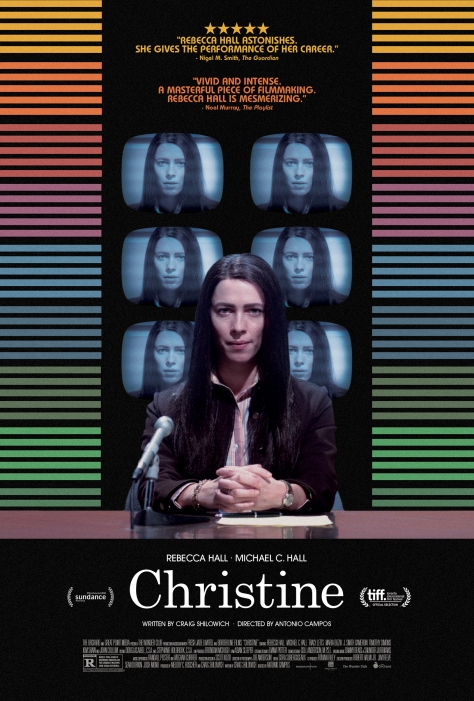 On the occasion of the poster release for new film Christine, allow me to tell you a brief story about why doing means so much more than just talking.

Some years ago, I happened upon my college’s Wikipedia page. As I scanned over the “Notable Alumni” section, one name stood out to me—one that I didn’t recognize: Christine Chubbuck. I clicked on her name and found myself reading this story of a troubled woman whose tragic actions shook the world of live television. I happened to think about her again just last year when a psychotic man gunned down a reporter and her cameraman during a live feed in Roanoke, Virginia.

Chubbuck was a television journalist working at a local news station in Sarasota, Florida during the Vietnam War. “If it bleeds, it leads” was a common sentiment among news organizations. On July 15, 1974, Chubbuck led that day’s televised newscast by covering a few stories before making the following statement: “In keeping with Channel 40’s policy of bringing you the latest in ‘blood and guts’, and in living color, you are going to see another first—attempted suicide.” And with that, she took out a revolver and shot herself behind her right ear. The newscast quickly faded to black.

As sad and troubling as this story was, my movie brain wondered how this hadn’t been the subject of a feature film (though I could understand why Chubbuck wasn’t exactly featured on my college’s brochure). In fact, I learned that Chubbuck’s story was partly the inspiration for the classic 1976 film Network (“I’m as mad as hell, and I’m not going to take this anymore”), but there was no film about Christine. I thought, “I have to write this.” I even casted the film in my own mind. Rebecca Hall would have to play Christine. She bears some resemblance, but more importantly she’s a terrific actress who I felt could inhabit the depths of Chubbuck’s lonely, depressed state of mind. She would be so good that she’d immediately enter the Oscar conversation. The film would be called “Chubbuck.” Ah, fantasy!

Of course, this was all talk. I didn’t actually write the film, but I did spend years telling people about it and always thought this is something I should write.

So imagine my surprise earlier this year, when upon following news coming out of the Sundance Film Festival I heard rumblings of a terrific new film from Antonio Campos and written by new scribe Craig Shilowich. It was the story of Christine Chubbuck. It was called Christine (they opted for her first name). And it starred … you guessed it, Rebecca Hall. Critics called her performance the best of her career and they informed Oscar to perk its eyes and ears. My jaw shattered the floor. Great minds think alike?

I don’t know when Campos or Shilowich first came upon Chubbuck’s story, or when they began developing it. It could have all started before I conceived of the idea myself. Or it might have been after. The point is, I spent years dreaming and talking, and never once put pen to paper. I don’t know how my version of this story might have compared, but I am looking forward to seeing this actually finished product when the film opens on October 14. And perhaps now I’ll finally jump right into the original idea I’ve been batting around for over a decade. I’ll consider this a kick in the pants.