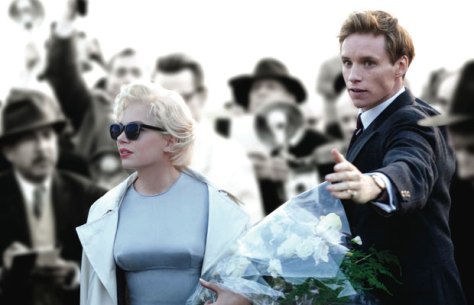 I caught a screening of the Michelle Williams-starring My Week with Marilyn, prior to its world premiere at the New York Film Festival today. This true story stars Williams as Marilyn Monroe during the filming of The Prince and the Showgirl (1957) in England. Colin Clark (Eddie Redmayne) is a 23-year-old film enthusiast who pushes his way into working with Laurence Olivier (Kenneth Branagh) on his new film, which he’s directing and starring in opposite Monroe. Throughout filming, Olivier finds it difficult to work with the struggling Marilyn (she’s not the great actress she wants to be), who is newly married to famed playwright Arthur Miller (Dougray Scott). When Arthur leaves Marilyn’s side to be with his children in New York, the delicate and troubled Marilyn begins to confide in young Colin, who grows close to her despite the advice of everyone around.

Here are a few clips from today’s press conference at New York’s Walter Reade Theater, featuring Curtis, Williams, and Redmayne. (The sound quality is acceptable, but not ideal.)

[CLIPS HAVE BEEN DELETED.]