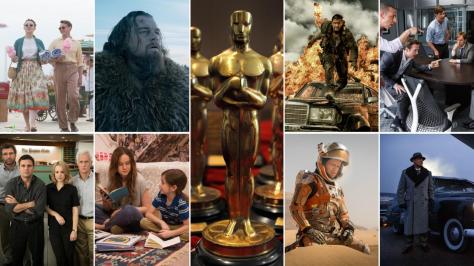 Dan – The Revenant. This is a three-way race between The Revenant,Spotlight, and The Big Short. But The Revenant, with its field-leading 12 nominations, deserves the edge because of its vision, its scope, and its mastery and complexity in both above-the-line (directing, acting, writing) and below-the-line (production design, makeup/hairstyling, visual effects, etc.) categories.

Drew – The Revenant. Following a notoriously troubled shoot full of dueling personalities, unpredictable weather, and last-minute location changes, the fact that this film is even in the discussion is, in itself, a miracle. Its power lies in its story, that of a father and his eternal love for his son, that pulls at the heartstrings of filmgoers. Its reverence, its moral ambiguity, and its spiritual center, accompanied by raw, powerful visuals, offer what no other Best Picture nominee can offer this year: the definition of a cinematic experience. This film is destined to become a classic.

Dan – Alejandro G. Iñárritu (with George Miller as a close second). Both Iñárritu and Miller display immense vision in their respective pieces, but it’s Iñárritu’s never-say-die attitude and visceral style of filmmaking (despite the controversy over the making of his film) that should earn him his second straight trip to the podium (he’d be the third to earn it).

Drew – Alejandro G. Iñárritu. For pulling together a massively impressive film, one that found itself in constant danger of falling apart at any moment, with the heart and center of the story not only unscathed but beaming magnificently, Iñárritu deserves a rare second consecutive Best Director win.

Dan – Leonardo DiCaprio (with Eddie Redmayne on his tail). These two performances were the most stunning lead performances last year, in my opinion—and they couldn’t be more different. DiCaprio turns in a physical, “rustic” performance, while Redmayne’s is fragile and nuanced. DiCaprio’s is one of the finest of his career, and the fact that he was able to do what he did while under those well-noted, grueling conditions is remarkable.

Drew – Leonardo DiCaprio. After being snubbed for nominations forTitanic and Revolutionary Road, after losing the Oscar four previous times, after paying his dues and working twice as hard as nearly anyone else of his acting generation, DiCaprio has proven himself worthy of the coronation that awaits him. More importantly, his performance was, indeed, the best performance (male or female) of the entire year.

Dan – Brie Larson. Larson has been turning in solid, under-the-radar performances for quite some time, so it’s good to see her finally breaking out and earning due recognition. In Room, she captures the part of an abused woman trapped with her son with emotion, with truth, and with an inner strength not easily accomplished by many actors.

Drew – Saoirse Ronan. In an unconventional Best Actress performance, Ronan doesn’t blow you away with a particularly showy scene or role. Rather, she infuses her humble character with an anxious, subtle, childlike wonder in an affecting performance that sticks in the mind for days—a feat worthy of more attention than she is receiving. With her performance in Brooklyn, Ronan proves that her Best Supporting Actress nomination for Atonement at age 13 was a foreshadowing, not a fluke.

Dan – Mark Rylance (or Christian Bale or Tom Hardy). Oh boy, what a difficult category. Some of the best performances last year were in the supporting ranks, and fortunately, many of them are nominated here. I give Rylance the slight edge in deservedness because of the brilliance he displays with as few words as possible. It’s harder to act with a look—or in Rylance’s case, an aura—than with words. He steals every one of his scenes with minimal dialogue and action, and that’s not easy to do.

Drew – Tom Hardy. Hardy depicts cinema’s newest entry into its canon of most despised movie villains with not a hint of heart or salvation, simultaneously feeding—and feeding off of—Leonardo DiCaprio’s lead performance in a spectacular, magnetic portrayal of dueling destinies. Coupled with two other impressive performances this year—in Mad Max: Fury Road and Legend—Hardy ought to be able to take this award easily.

Dan – Alicia Vikander. First off, it’s a travesty that a character that has as much screen time and as much influence in the direction of the plot as Vikander’s is relegated to the supporting category. Vikander is a lead in The Danish Girl. Period. This shameless campaigning for a supporting nomination (or vice versa) because it might be “easier” to win has been going on for years (another prime example is Hailee Steinfeld in True Grit), and there has to be some regulation put in place to correct it. (Interestingly, one key example of a supporting performance made lead for the sake of winning an Oscar came from Vikander’s primary competition here, Kate Winslet in The Reader, despite being absent from the 2008 film for a gaping portion. Spoiler alert: she won.) But I digress. Of these five performances—whether supporting or lead—Vikander’s is subtle, heart wrenching, and restrained. For that, she deserves the win.

Drew – Rooney Mara. Delivering what is perhaps the year’s most subdued performance, Mara does more with her facial expressions than most actors do with entire soliloquies of dialogue. The painful heartache in her wide eyes, pervasive throughout the film, is a welcome tease that only leaves you wanting more from her enigmatic and clearly conflicted character. What a treat she gave moviegoers this year!

Dan – Pete Docter/Meg LeFauve/Josh Cooley/Ronnie del Carmen (Inside Out). As of this writing, I have not yet seen Ex Machina andStraight Outta Compton, but of the remaining three, Inside Out packs the greatest emotional punch (for which Pixar is famous) and is the one that most prominently puts the “Original” in Best Original Screenplay. Understandably, this award is not necessarily meant to honor the mostoriginal story, so long as it wasn’t adapted from source material. Still, the genius brain trust that came up with this gem should be honored for doing its “Pixar thing”: appealing to both kids and grownups with both comedy and drama, and with a whole lot of sniffling in the audience. (And, by the way, let’s throw in a high-concept narrative and a colorful character named Bing Bong that breaks your heart.) Pixar writers are the hardest working in the business.

Drew – Josh Singer/Tom McCarthy (Spotlight). For bringing to light a complicated, sensitive, true story with the correct perspective, tone, and clarity, Spotlight deserves this award much as the original Spotlight team of The Boston Globe deserved its 2003 Pulitzer Prize for its investigative coverage detailing the mass-scale cover-ups of child sexual abuse in the Catholic Church.

Dan – Nick Hornby (Brooklyn). Brooklyn’s is a rather simple screenplay. It’s not filled with bells and whistles. It doesn’t make the loudest noise. (Those distinctions belong to The Big Short and The Martian.) However, by the end of the film I found myself thinking, “You know, the screenwriting techniques are tried and true and unoriginal, but they’re so measured and serve the story quite well,” so I give Brooklynmy thumbs up.

Drew – Nick Hornby (Brooklyn). For its nuanced portrayal of a young woman’s intercontinental journey through culture clashes, emerging self-awareness, budding love, and conflicting emotions, Brooklynsuccessfully delivers a nostalgic, tonally perfect story that all filmgoers—men and women—can relate to and enjoy.