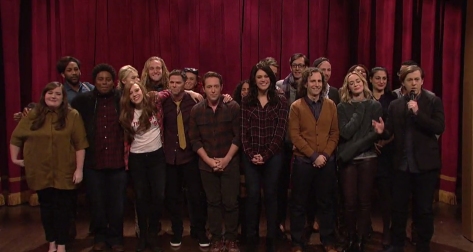 There are few SNL sketches that will top “Schweddy Balls,” based on my personal tastes and sensibilities. That sketch, perfectly written by Ana Gasteyer, is so multi-layered, so well performed, and just plain hilarious.

And then there was “Short Film” (watch here).

No, “Short Film,” which aired on last week’s Emily Blunt-hosted episode, does not top Gasteyer’s and Molly Shannon’s NPR-set sketch, but it comes pretty damn close—again, per my personal tastes and sensibilities (it’s likely not everyone’s cup of tea).

The sketch, which is set at the Ann Arbor Short Film Festival, depicts a tiny screening room stuffed with the army-sized cast and crew of a 20-second short called “qua”—one at which even art houses might turn up their pointed noses. No doubt, Christopher Nolan’s “Doodlebug” was an inspiration.

Having served on the screening committee of a major film festival, I’ve seen my fair share of “overly artistic” short films. And every now and then, it’s fun to laugh at their pretension. So watching this sketch puts me right back into that world, and I can’t help but laugh.

But what gets me the most about this sketch is not any individual performance or joke, it’s the situation, as a whole. I know all too well what it’s like to be at a film festival or screening where the cast and crew outnumber the audience 10:1. And I know that feeling of standing on stage waiting for a forced question from an audience member so that you can spill your pearls and demonstrate your artistry, which perhaps more often than not is not apparent in the film (the film should speak for itself, right?).

This sketch is not one that would matter to most viewers. It’s one that might garner a chuckle or two. But for me, I couldn’t help but smile the whole way through. Especially since just five days later I found myself again on a tiny stage in a tiny screening room of a tiny festival describing my own film to a tiny audience. And although that might not sound like a dream scenario, I can’t help but love it. It’s being a filmmaker in its purest form. (And yes, Charlie Kaufman is my favorite screenwriter.)