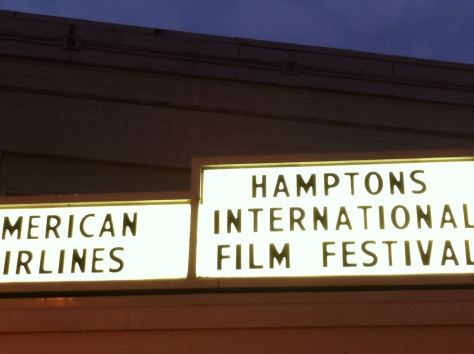 (Read about the entire process of making short film, “In-Kind,” by checking out the “Anatomy of a Short Film” section of this blog.)

My film partner Stephanie and I attended the Hamptons International Film Festival this past weekend. I’ve been serving on the festival’s screening committee for the past few years and have been to the festival just once before. After waking up far earlier than I would ever wish to on a Saturday morning, I got together with Stephanie and we headed to Penn Station to catch our train to East Hampton. Along the way, we continued work on the shotlist for our short film, “In-Kind,” which we had begun several weeks earlier. Our progress has been slow, but fruitful. I’m excited about some creative shots we have planned, including one inspired by my filmmaking idol, Alfred Hitchcock (let’s hope we can execute it and do it justice).

The train pulled into East Hampton Station and we easily found our way to the theatre on foot. After some back and forth between venues to pick up our passes, we got in line for an advance screening of Jason Reitman’s Labor Day, starring Kate Winslet and Josh Brolin. The film felt like a departure for Reitman (Stephanie called it “Reitman does Nicholas Sparks”), and, unfortunately, I can’t say it was a step in the right direction for him. The film is underwhelming and lacks a good amount of rationale and motivation for some parts.

We then met up with some folks and had a leisurely lunch before heading to another theatre to screen a shorts program. Once again, I was left underwhelmed. The shorts were experimental, which never leaves a good taste in my mouth. (They seemed so interesting on paper!) Despite the lackluster crop of films we screened, Stephanie and I were having a great day in the Hamptons. We caught up with our same friends from earlier for dinner before heading back home. And then the adventure began …

East Hampton Station was right where we left it. We arrived around 8:50pm, just in time for the 9pm train—the last train of the night. If we missed this one, we’d have to wait until the following morning to catch the next train. With nowhere to stay, we couldn’t miss it. 9pm rolls around. No train. 9:10 creeps up. No train. Okay, so now we’re worried. As Stephanie got on the phone with the Long Island Rail Road, I checked the train schedule on my phone. We both came to the same conclusion: the 9pm time listed on the print schedule we had been consulting was only applicable to certain days. Ouch! Now what?

We had heard of the Hampton Jitney. I see it wheeling around Manhattan from time to time, and for Stephanie it hearkened back to an episode of Sex and the City she knew. I did some quick work on my phone and discovered that the last Jitney out of East Hampton headed to Manhattan (a good two-hours-plus away) was scheduled for 10pm. We picked up our things, headed to the bus stop, and crossed our fingers.

The sight of a bus approaching at 9:55pm meant I could finally exhale. (The last thing I wanted was to be stranded in the Hamptons overnight—the irony of which just occurred to me, considering that “In-Kind” is about homelessness. And I guess there could be worse things than being homeless for one night in a beautiful, quaint town with nice weather.)

It always seemed like riding the Hampton Jitney was some sort of “experience.” I didn’t understand why until the on-board steward handed me my complimentary snack and drink. I made quick work of my Pepperidge Farm Goldfish and lemonade, then slept the rest of the way …

We didn’t finish the shotlist for “In-Kind” on Saturday, as we had hoped, so we picked it up again on Sunday, amidst making a pot of chili. (In Labor Day, Josh Brolin’s character makes chili, and we had been thinking about it ever since—so I guess that’s one good thing that came from the movie.) We succeeded in completing our shotlist and decided on our next meeting date. Progress is slow, but it’s beginning to come together.

My advice for when you’re making a film without a set deadline: never end a meeting without scheduling the next one. It’s the only way to ensure you’re keeping the wheels in motion.

Until next time, be kind …