For the past two years, I’ve been a member of the Hamptons International Film Festival’s (HIFF) screening committee. I watch dozens of submitted films and write brief reviews for and rate each, helping the programmers to decide which films to accept into this prestigious festival. This year, HIFF turns 20 and I made sure to attend for the first time.

My friend Erin and I took the train from the western tip of Long Island to the eastern side, a three-hour ride. (There’s a reason it’s called “Long Island.”) This was my first trip to the Hamptons, home of New York’s well-to-do and known for some of the most pristine beaches on the East Coast.

Though we were only at HIFF for one day, we got a good taste of the festival overall. We started our day at the East Hampton United Artists theatre by attending a Kodak Master Class discussion with Oscar-winning cinematographer Robert Elswit. Seated beside a large movie screen, the moderator from Time Out New York and Elswit showed clips from several of his films, including Michael Clayton (2007); Good Night, and Good Luck. (2005); Boogie Nights (1997); and There Will be Blood (2007). While the clips played without sound, Elswit talked us through his work and told some interesting stories. It was like being present for live DVD commentary.

Following the discussion, we took a very short walk down the block and had lunch at Rowdy Hall, one of HIFF’s sponsors.

We then made our way back to the theatre for two screenings. The first was Sony Pictures Classics’ Smashed, starring Emmy winner Aaron Paul (TV’s Breaking Bad) and Mary Elizabeth Winstead (Scott Pilgrim vs. the World, 2010). The dramedy is about a young, alcoholic married couple and the struggle it goes through when the wife decides to go sober. The film also features Oscar winner Octavia Spencer, Megan Mullally, and Mullally’s real-life husband Nick Offerman (TV’s Parks and Recreation). Following the screening, Winstead and director James Ponsoldt held a brief Q&A. 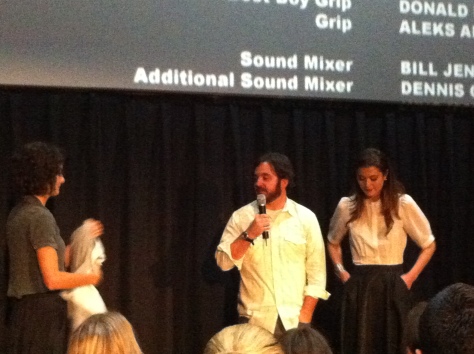 Our next film was another Sony Pictures Classics release, France’s Rust and Bone, starring Oscar winner Marion Cotillard and Belgian actor Matthias Schoenaerts, directed by award-winning director Jacques Audiard (A Prophet, 2009). Cotillard plays Stephanie, a whale trainer at Marineland. After a horrible accident in front of a cheering audience, Stephanie suffers a terrible injury that results in both of her legs being amputated. Schoenaerts plays a troubled single father who becomes romantically linked to Stephanie. Schoenaerts was present for a post-movie Q&A. Both films were great and definitely represented the “international” quality of the Hamptons International Film Festival. They are among this year’s potential Oscar hopefuls. (Cotillard is considered a strong favorite for another Best Actress nomination, following her 2008 win for her absolutely stunning performance in La vie en rose—still her best performance that I’ve seen.) 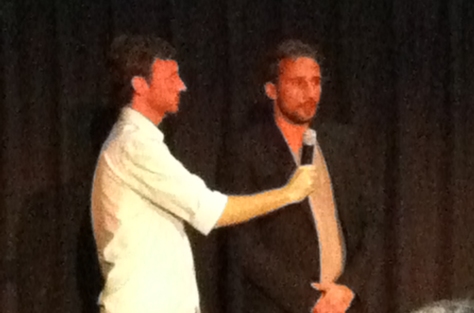 After our last screening, we had time to wander around East Hampton’s Main Street, where we took in some local shops, including a book store (BookHampton) and Dylan’s Candy Bar, where I found a banana creme-flavored chocolate bar! (It was delicious.)

Outside the theatre, we stumbled upon actors Toby Jones and Sienna Miller, posing on the step-and-repeat (red carpet) just before the screening of their HBO movie The Girl, in which Jones plays my favorite filmmaker Alfred Hitchcock and Miller plays Tippi Hedren during the filming of The Birds (1963). (I can’t wait to see this one, as well as the upcoming Fox Searchlight film Hitchcock, starring Anthony Hopkins, which goes into the making of Psycho [1960].) 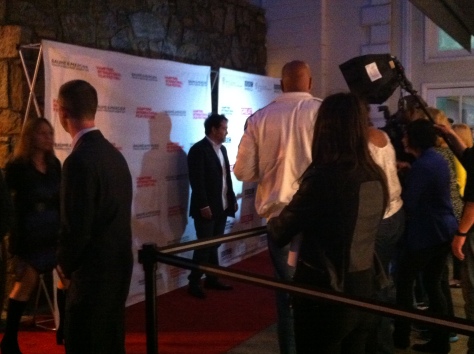 After a long day, Erin and I headed back to the train station and made our way back west. The 20th edition of the Hamptons International Film Festival was great and I definitely look forward to returning next year.